Betrayal at House on the Hill Soundboard

This soundboard sets the creepy tone for the thrilling board game Betrayal at House on the Hill!

Start off with eerie music that plays throughout the game. As you explore the haunted mansion, every Event, Item, and Omen has a unique sound effect that makes you feel like you’re right in the middle of the house. You’ll hear walls with heartbeats, creepy puppets, and men screaming on fire. You’ll also hear sounds of weapons you discover or items that help you.

Once the Haunt starts, switch the music to Haunt mode with it’s impending doom sound. Once you use this soundboard you’ll never be able to play without it! 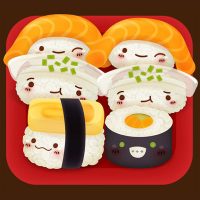 Tired of grabbing a pen and paper and having to do math each round?
Worried that you’re not properly scoring the ties for Maki Roll or Pudding?

This app takes all the work out of the game! The sleek and fun user interface melds perfectly with the cute Japanese theme of the game and makes it so you don’t have to calculate a score ever again. Simply select the player and tap each sushi they have for the round.

Sushi Go Score Calculator also plays Japanese Pop music in the background to keep the theme strong. Once you use this app you will never be able to play Sushi Go without it!

It starts by selecting a random player to be the Leader. It then takes you step by step, guiding you through the setup so you don’t miss any steps. Most importantly, it handles narrating the Spy Phase so you don’t have to!

This app is universal and works for iPhone, iPad, and iPod. See the app in action in this video demo.

Sticky Balls is easy to pick up but near impossible to put down. It is exceedingly simple but surprisingly difficult, leading to a cycle of “MUST REACH THE NEXT LEVEL” that can only be described as addicting. Sticky Balls is available for iPhone and iPad.

Attack of the Zombie Clowns!

The only thing scarier than zombies is clowns! Welcome to your nightmare – a creepy circus overrun by zombie clowns.

Play one of 4 circus characters trying to stop the undead horde from eating the circus crowd. Using your chainsaw, throw it and watch it bounce off zombies like a pinball. Just don’t touch the zombies!

Last as long as you can while using armor, cotton candy healing, collecting tickets, and pop stray balloons for a chance to spin the mystery wheel of death!

9 thoughts on “Our Apps”